Passion for Poppies by Sandy Worth 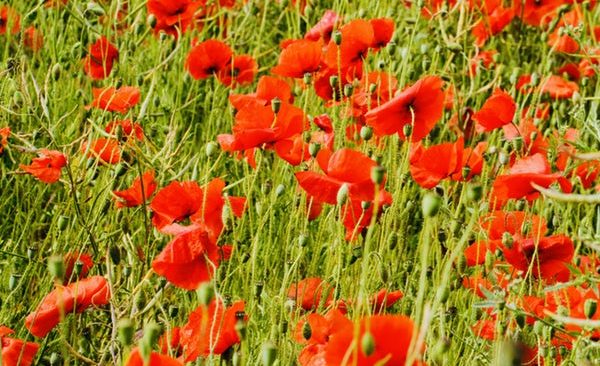 Passion for Poppies by Sandy Worth
By admin

Sandy Worth spoke about her “Passion for Poppies”. She previously created a recognized collection of Papaver orientale , went on to trial some Super Poppy hybrids, and thence developed her own varieties, with equal success. Sandy advised that her collection is closed, at present, but she showed us photographs, taken by a professional, depicting stunningly beautiful examples of her poppy creations.
Remarkably all the different poppies we see today came from one original subject. Among the many we were shown:-
Pinnacle – orange; Glowing Embers – orange; Beauty of Livermore – 4 foot, red; Raspberry Queen – apparently described by one observer as having Barbara Cartland eyelashes on its petals; Aglaja – apricot; The Trinity – white; Maiden Blush – white, with pink markings; Big Jim – red, from the USA, as was John III; Erste Zuneigang – pale apricot, with double blooms; Aslahan – very big, white, with pink markings.

Complex breeding, a protracted development, means that some Super Poppies tend to be more robust and flower more than once, in July, August, even September. 2007 marked the 25th anniversary of the Falklands conflict and of the Veterans’ Foundation and the poppy named for that was indeed “The Falklands” – red, with deeply serrated petals. In 2008 Sandy was invited to exhibit at Chelsea. Heartbeat, a red Super Poppy, was created for the Alton Heart Charity. Jacinth – a dark red; Vesuvius – red, and very big; Tequila Sunrise – orange with serrated petals; Snow White – prolific and second flowering; Alpha Centauri – pink; Aurora – orange. Bright Star, pink, was voted the best in the UK in “Which”. Medallion, deep pink, held the record for the longest flowering – 18 days.

Sandy informed us that the identity of each of the many varieties of poppies is found in the stigmatic disc or seed pod, as each has a distinctive pattern or shape. Cultivation: cut off the flower stems as soon as the petals drop. Once that is finished cut back all foliage to 3 inches above ground. A month later feed with Vitax Q4 and mulch with well rotted manure. To propagate, water well, remove leaves, place cuttings individually in seed tray compartments, add VitaxQ4 and vermiculite and place in a cold frame. When planted out they will need support.

After questions and answers Sandy was applauded and thanked for her informative presentation.