Over Wintering Fuchsias by Derek Dexter 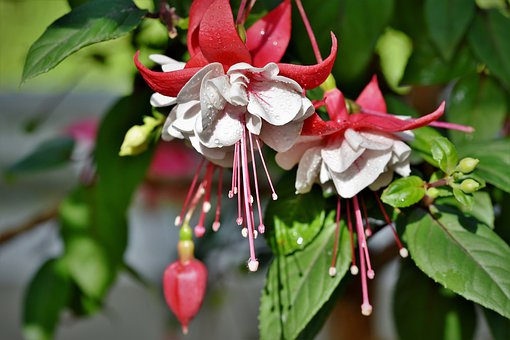 Over Wintering Fuchsias by Derek Dexter
By admin

Derek Dexter, of Wokingham Fuchsia Club gave a talk on these varied and beautiful plants to Club members. Since 1999, when he started growing and showing fuchsias Derek has won many trophies pursuing his hobby, as he describes it.

He demonstrated successful over-wintering of the plants, first cutting down one by half, then stripping off the leaves. He had stopped watering it a week before, to stop the sap rising, and so prevent die-back. It is placed in the greenhouse until the first or second of January, given a little water and covered with horticultural fleece, tucked under the pot. He tips it out of the pot: if the roots are white it is healthy and is repotted. If vine weevil is present he saws off the bottonm third of the root ball, and repots. Using warm water he starts spraying and feeds; leaves will develop. He showed us how to make a very small cutting below a joint, and place it in a small two inch pot with tweezers and a cocktail stick. He puts compost in the pot and covers it with a sandwich bag held in place with an elastic band and puts the pot on a window sill. The cuttings can be placed in a tray. He uses Verbe (compost) which he sifts through  a rough sieve. He mixes in Big Moss for water retention. He pinches out every second pair of leaves, to thicken up the cuttings and keep them the same height.

Hardwood cuttings are made  below a leaf joint at eight inches;  he removes the leaves and places the cuttings in a five inch pot, five around  the edge of the pot and places it underneath a shelf in the greenhouse. Throughout the Winter the roots will be growing and will be visible by the Spring. He places the cuttings in trays and leaves for six to seven weeks  before planting out. Derek makes the stems trail, if he chooses, by attaching pegs at their tips. Fuchsias can be overwintered by covering them with fleece and keeping them in a well ventilated greenhouse..

Hardy fuchsias can be left where they are, in the garden, with two inches of leaf mould around the base of the stems. Do not cut back in February, as there can still be night frosts. Spray at the end of March, and check them in the second week of April; do not cut back until then and only if they are ready. Keep checking all for pests and diseases, rust, red spider and thrips. Use SB Invigorator for healthy growth, and treating pests, whitefly in particular. Use Bravado for vine weevil on hardy fuchsias.

This was an informative, entertaining and inspiring talk.