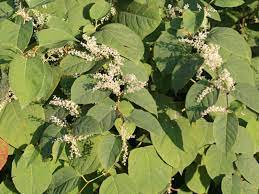 The December meeting was a talk from Chris Bird who is a lecturer at Sparsholt College.
Invasive Species was the theme of his informative talk which explained that new invasive species have been introduced to the UK over a long period of time, ground elder has been here since Henry V111.

Fly tipping garden waste has allowed unwanted plants to spread and they have invaded natural habitats.

Tree pests affecting Ash, Larch, Oak and other species have spread also. The Asian Hornet is a threat and should be reported if seen.

Fairy fern has found its way into rivers and streams and causes blockages.
Japanese Knotweed is a huge problem and first appeared as an ornamental plant in Victorian times.

Giant hogweed can cause blisters if touched and Himalayan Balsam is very invasive and was first introduced here in 1839. It explosive seeds means it is quick to crowd riverbanks and ditches and prevent native species from growing.
We need to be alert to plants that cause these growing problems and do what we can to stop them.