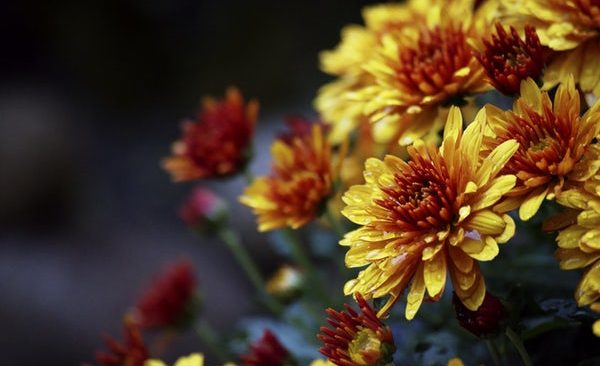 Enjoying dahlias and chrysanthemums by Bryan J Madders
By admin

Bryan J. Madders, who has been Chairman of the New Forest Dahlia and Chrysanthemum Society and is a public speaker and judge spoke to Club members about these varied and rewarding plants.

The chrysanthemum came from China, and is also the national flower of Japan. They can be grown from seed, the early forms lasting until October, and the later ones, with protection, until early December. After flowering dig them up and put in pots with soil around a 10” stem. No watering during he winter. In February bring them out of hibernation, add fresh soil and remember to label, especially for identifying colour later. Add some moisture at 50/55 degrees f. When there is some green growth plant out, perhaps with rooting powder, and in compost: no fertilizer needed. A bag over them will provide protection, but check at intervals. They will start growing in 2/3 weeks, (indicated by a dark green centre.) Put into pots and harden off. If too long, too soon, cut off the top, to get plenty of flowers. Look for dormant buds which will vary in number according to the variety. Take out a single “king” bud, so that all of the stems flower at the same tome. They can be singles or doubles; for the latter start earlier. Disbud, that is, leave one bud on each stem (the others are removed). A bud bag will protect them for a time eg from very heavy rain. The main pest is blackfly: perhaps use soap and water, but if really infested the plant must be binned.

“The Pinch” may restrict growth, though some grow very tall. This was shown in a slide and we saw other types, for example Anemones, a rich pink, sprays, “Fantasies” from Japan and exhibition chrysanthemums, some with 13/14 heads, or one stem and one flower. “Reflexes” have petals that curve downwards. “Pot Mums” are easy to grow. Feed well, and pinch out some flowers. One slide showed a large sphere of closely growing flower heads, all in a 10” pot. Pots we can move around for effect. These “Mums” last until November. Put in a greenhouse and trim, to keep tidy. Take cuttings, as with the larger varieties mentioned earlier.

The “Korean” keeps on flowering, and provides late colour into October. Chrysanthemums have a variety of forms and colour, offering a wide choice.

Dahlias, Bryan suggests, are having a revival. There is one for any situation, thanks to multiple forms and a raft of colours, many striking. “No shrinking violet,” he says.

They grow in the foothills of the Andes, and were brought back to Spain.

Cultivation: they can be grown from seed, like sunshine, and dislike frost. Sow seeds for this year now. It is all right to leave the tubers in the garden, if well covered. Later he digs them up, and keeps them at a cool, even temperature. Plant in compost, no fertilizer, with grit or vermiculite. After six weeks, when they are 2/3 inches long, take cuttings at the end of May. Ensure that the stem is “solid”. Keep out of sunlight, and spray water gently. After 2 or 3 weeks you get roots. Remember the label! By November you will see a tuber as big as the original. If left, after 5 years there will be a mass of tubers that need to be disentangled and teased apart. Plant out in May and re-pot if pot-bound with a little blood and bone and you can fertilize when buds and flowers are forming. After 2 – 3 weeks pinch out the top, to encourage more flowers.

There are so many varieties, for example “ball” types called pompom by the Dutch. True pompoms last well. Some dahlias are grown to show, eg “Zorro”, a giant true red plant. “Water lily” types close up at night. Named ones – “Star Wars” “Bishop of Landaff”, with dark green foliage, “Pink Giraffe”, “Stargazer”. If feeding is required use one with high nitrogen and potash as the buds are coning out. Earwigs are a problem: they sleep at the top of the stem, and eat the flowers, so remove them.

This informative talk, delivered with humour, was much appreciated by all present.