Carnivorous Plants From Around The World – David Tite 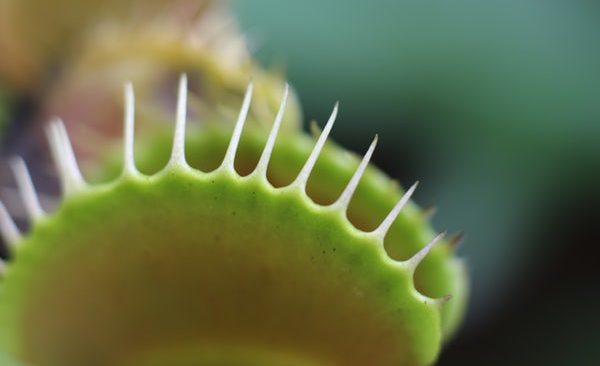 Carnivorous Plants From Around The World – David Tite
By admin

Dionaea mascipula, commonly known as The Venus Fly Trap has many forms, and the advice was to put it on an ants’ nest at the end of the Summer. Cephalotus follicularis, found in Australia, grows in inhospitable, inaccessible places, such as cliff tops, has flowers on long stems and “in a pot is stunning, or overhanging a fence”. Drosera sundew, found in Australia, South Africa, some in England, thrives, as do most of these plants, in wet areas, especially peat bogs. Its sticky stems capture and wrap around flies.

Sarracenia purpurea “Huntsman’s cup” is one of the genus of perennials with pitchers, formed from modified leaves with hooded tops. The pitchers are tinged and veined purplish red, and in Spring five-petalled purple flowers are carried above.

Pitchers are recurring features of carnivorous plants, which use colour and scent to attract insects, such as flies, wasps and midges, have hairs to trap, catch rainwater, and use bacteria to digest and then feed on the bacteria – a symbiotic relationship. David Tite called it “Nature’s first recycling process.”

Nepenthes, over 100 species is a tropical pitcher plant, found in Australia, Gambia, The Philippines, Sumatra, everywhere where there are volcanoes. A jungle plant, they will attach and climb. They produce nectar and eat ants. Some attract monkeys who drink from the pitchers, consequently called “monkey jars”. They grow in wet conditions such as at the edge of swamps or rice fields.

Utricularia are water plants with bladder-like modified leaves that trap and digest insects. Most are free-floating and some are suitable only for tropical aquariums. David said they have “the fastest trigger action in Nature.”

Pinguicula are Summer flowering perennials with greasy leaves that trap insects which are then digested for food. It has beautiful flowers and is useful in pots under glass among plants at risk from aphids. The Victorians used them to deal with flies. Found in England, America and Mexico. Mexico, in fact, has the only red flowered one. Darlingtonia californica.

David said that cultivation of carnivorous plants is time-consuming. Clearly they must be maintained in wet conditions, but also most need sun. Potting on: avoid root disturbance and trim the previous year’s growth. Most importantly water must be rainwater; tap water will kill. We were shown them in large greenhouses but David has had plants outside for 30 years.

A series of slides showed how striking and colourful they can be, and we saw displays at the main flower shows – Chelsea, Tatton Park and Hampton Court.

A footnote: as carnivorous plants trap so many insects, including wasps, one of the questions asked was “How about bees”? Fortunately it seems they are not attracted to carnivorous plants, though bumble bees may be, alas.