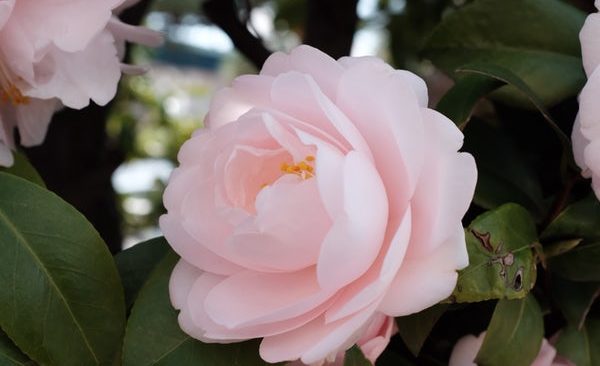 Camellias by Jennifer Trehane
By admin

Jennifer Trehane, Plantswoman, Lecturer and Broadcaster gave a talk on Camellias to the Littleton and Harestock Gardening Club. The Camellia is a genus of flowering plants, (shrubs and trees), in the family “theaceae”, found in Eastern and Southern Asia, from the Himalayas to Japan and Indonesia. There are 300 species and around 3,000 hybrids. The shrubs are evergreen with thick, serrated and usually glossy leaves and bear large, lovely flowers. Colours vary from white, through pink to truly red. Yellow – flowered specimens are found only in South China and Vietnam. All have developed from one – Camellia japonica, and new species are still being discovered. They like shelter and shade, need well drained neutral to acid soil that must not be allowed to dry out.. Whilst most are quite hardy their roots must be protected from frost. Shrubs are best pruned to shape after flowering. Pests to look out for are aphids, thrips and scale insects, which at least are enjoyed by the birds.

Jennifer is an acknowledged authority on Camellias. She has had her own nursery (now run by two previous employees), has travelled extensively in China and Japan and returns regularly, in particular to Izu Oshima Island. It has a flowing volcano and a wild Camellia forest of 3 million trees that have been growing there for probably thousands of years. The fruits fall from the Camellia trees, are gathered up and split open to reveal seeds which are washed, dried and pressed. The oil thus produced is filtered and used in cooking and in cosmetics eg hair care. The husks are used as a mulch in the Nursery, and cuttings are later taken from the highest – yielding trees. There are also charcoal burners in the forest. Camellia sinensis is cultivated for its leaves which are used to make tea. Camellia oleifera produces tea seed oil, used in cooking. Camellia petals are used to make dye for fabrics and also to make jam, and other artefacts can be found in the Camellia Information Centre. There also can be seen a rock with the imprint of a Comellia leaf from many thousands of years ago.

There is a High School on the island, and the students proudly show off the extra curricular orchard they cultivate, making their own oil. In Jennifer’s colourful slides we were shown the island, its lovely garden, temples, festival processions and islanders in colourful costumes, many featuring embroidered Camellia blooms. Other slides showed us striking Camellia japonica and reticulata specimens. (My RHS Encyclopedia has some splendidly colourful photographs).

This was an entertaining and inspiring presentation, much appreciated by Club members.