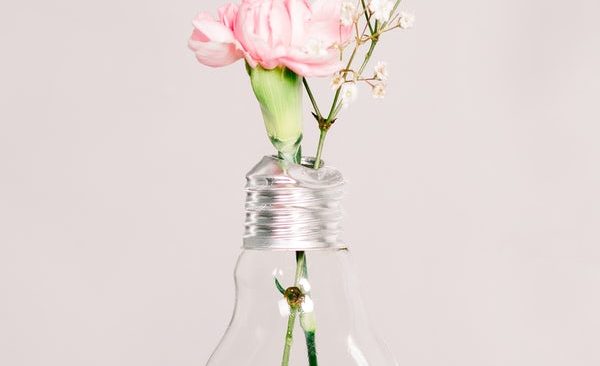 We were reminded that a bulb is the first plant we all grow, often a hyacinth, and that both Spring and Summer bulbs are a great way to add colour, and, in pots, to bring the garden nearer to the house. They are better planted “in the green” and allowed to seed. Many are now used as cut flowers, for example Nerines and Alliums.

Numerous colourful slides illustrated the impact of planned bulb planting, eg in the mass or in groups, also placing certain colours together for contrast. In one slide Muscari and Tulipa sylvestris, blue and yellow, were planted in swathes, to create a natural landscape, the Muscari representing a “river”. The setting is important: think of blue, an amazing mixer, and its impact in light shade, as in a bluebell wood.

A bulb is a power pack, so feed it well. Small bulbs, such as Galanthus Nivalis (snowdrop) have a shorter life out of the ground. Buy in early November, plant in the green three times the depth of the bulb in organic, humus–rich soil. Other spring bulbs are: Crocus tomasinianus (Andy prefers small ones, that die gracefully.) Chionodoxa forbesii “Glory of the Snow” Anenome nemorosa – good on alkaline soil. Anemone coronarii – in pots for the first year, good for cutting. Trillium grandiflorum likes neutral or acid soil, is white then ages to pink.
Narcissus – many forms eg. N. “Jack Snipe” (white), N. Ice Follies.

N.Poeticum var. recurvus blooms until May and is perfumed.
N. Thalia (milk white). N .pseudonarcissus ( Lent lily). Do not buy mixed packs, or on price. They are best planted in groups, the natural way, and left to die down naturally.

Alliums: A. Purple Sensation is cheap and makes an impact. A.Cristophii. A.Schubertii. A.Mount Everest-white. Alliums are self-seeding, and form good seed heads. Hide their untidy foliage in surrounding plants. Eremurus robustus – “Foxtail Lily” is an upright perennial. Agapanthus: Headbourne Hybrids and many other varieties. See the Nursery at Beaulieu in August. Crocosmia (Montbretia) are corms, can get crowded, and stop flowering. Crocosmia Carmin Brilliant “stands up,” as it is smaller.

Dahlia:- Smaller ones may be best. Start in pots, later pinch out tops, and plant out in mid May. D.Bishop of Landaff has bronze and green leaves and dark red flowers. D. Bishop of Leicester. D. Chat Noir. Begonias: “Still incredible value, and have taken over from Busy Lizzies,” Andy says. Calla Lily is good as a cut plant. Cannas are robust, showy perennials.
Lilies: L.regale is best as a long term garden plant. It produces up to twentyfive fragrant flowers. L.Pink Perfection. L.Henryi produces many orange flowers. L. Scheherazade. L.Sweet Lord. In lilies bulb size is the circumference in centimetres, the bigger the better. Look out for them now, and plant soon, placing the bulbs on their sides. They work well in pots. Lily beetle can be a problem; pick them off and squash them. Nerines: are grown for their spherical heads of wavy-petalled, pink to red, occasionally white flowers. N.bowdenii. Cyclamens: there are many lovely specimens eg. C.hederifolium.

To quote Andy,“Flower bulbs are real survivors”, and his absorbing, entertaining talk gave us some charming reminders of that reality.