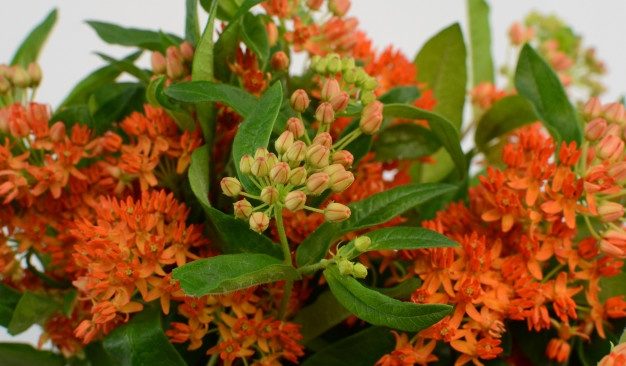 Asclepias, a genus of tuberous perennials or subshrubs was the subject of a talk given to Littleton and Harestock Gardening Club by Barry Clarke, a widely travelled and experienced plantsman and keeper of five National Collections.

They grow naturally in South America, North America, Canada and in South Africa. Grown for their flowers, which are five horned, they can range from shades of pink, as in A.incarnata which also has a white form, A.alba, to A.tuberosa which can be a bright orange – red. Called the Silk Weed or Milk Weed, because the stems exude a white sap when cut, like Euphorbia, they can be nectar – rich and sweet scented, and hence attract insects. There are numerous species, as we saw in many striking slides, can be fully hardy to frost tender, small or up to 5 feet tall. Some are invasive so are best in pots. Seeds are carried in pods, their shape sometimes reflected in their names, for example Gomphocarpus forms: “The Goose Plant”, “The Swan Plant” and “The Balloon Plant”. These are found only in South Africa., in the spectacular Drakensburg Mountains. This area is recommended by Barry as one where there are many varied plants thriving in lush conditions resulting from water flowing from the mountains. Asclepias leaves are varied too, from lance shaped to broad, pale green soft and tactile.

Asclepias is best grown from seed, and the seeds store well. Soak them for 48 hours; keep them in a bag of compost, to hold moisture, in the fridge. They germinate well and can be grown initially in cells, and then planted out in the garden. Propagate by tip cuttings or seed in Spring. Take cuttings in the Autumn.

Barry told us he enjoys teaching and he loves plant propagation, indeed “Pink Passion”, a tall, scented Asclepias a cross between A.syriacus and A.speciosa is his creation. Predictably his talk was detailed, absorbing and inspiring.